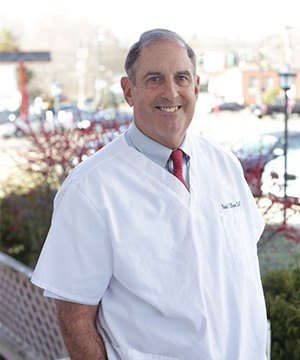 Dr. O’Brien has a reputation for being able to help even the most nervous patient feel completely at ease. This is a skill he has honed over the course of his career, which has spanned over 35 years so far. He brings his wealth of experience to every consultation, exam, and procedure he provides, with the goal of helping patients get exactly what they need in the most comfortable way possible. He cannot wait to meet you, but first, you can learn more about him below.

Dr. O’Brien is a member of the American Dental Association, Connecticut State Dental Association, New Haven Dental Association, and OKU (National Dental Honor Society). He even recently received an Associate Fellowship in laser dentistry. He has participated in over 1,000 hours of continuing education throughout his career in an effort to provide the highest quality care possible for his patients.

Life Outside of Dentistry

Dr. O’Brien is an athlete at heart. He played college basketball for The University of Pennsylvania and participated in two NCAA March Madness tournaments, once reaching the round of 16 and once making it to the Final Four. He has also played platform tennis and tennis for most of his life. However, his current passion, after his family, is golf. He spends most of his free time on the links playing to a single digit handicap. He has had the privilege of being able to play all over the United States and Great Britain, including several US Open and British Open venues. Royal Dornoch, home of Donald Ross in the highlands of Scotland, is his favorite golf course in the world.